M4G & Qld Toffeeare left to battle it out in week three...

Fixtures for week three are: 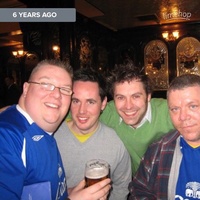 M4G & Qld Toffee are left to battle it out in week three...

Fixtures for week three are:

Congratulations to Qld Toffee, who wins the round and with the 2 bonus points, moves up to 6th in the league. Two rounds of fixtures left, so time to squeeze on one more round.

Congratulations to the 2017-18 Predictor winner.... Da Judge.  Who follows up last years win and holds on to the title for another year.  A very impressive total so far of 55pts for the season.

Time to squeexe in one more round.  Fixtures for week one are:

So just TD & Yankthattoffee make it to the final round of the season and with it a chance to steal 2nd place in the league.

Fixtures for week two are:

Knight of Thorgothshire [33]
Starting: 33pts
Week One: Everton (J) OUT

Goodison_Gringo [14]
Starting: 14pts
Week One: OUT

Hell, anything almost could happen this weekend

I think Tottenham (or the RS) look the best call. Just so few games with anything riding on them now.. and the teams at the bottom aren't exactly shoe-ins to win any game.

TD wins the final round of the season.

Knight of Thorgothshire [33]
Starting: 33pts
Week One: Everton (J) OUT

Goodison_Gringo [14]
Starting: 14pts
Week One: OUT