3-0 Naismith with all 3. He is the new Scottish Rooney.

No place for Nais in my side:

This time we won't play a ridiculously high line, the midfield will be swamped, we'll push Villa back and they won't actually touch the ball until the 34th minute, except to pick it out of the next three times. They'll change things around in the second half, but we'll sit deep and pick them off twice on the break.

5-0 a hat trick for Mirallas - the new Suarez only better looking and not a cunt - one each for Barkley and Barry.

Sack the Juggler wrote:Having a pint in rigbys with my cousin and graham Stuart is in here too! Diamond geezer! 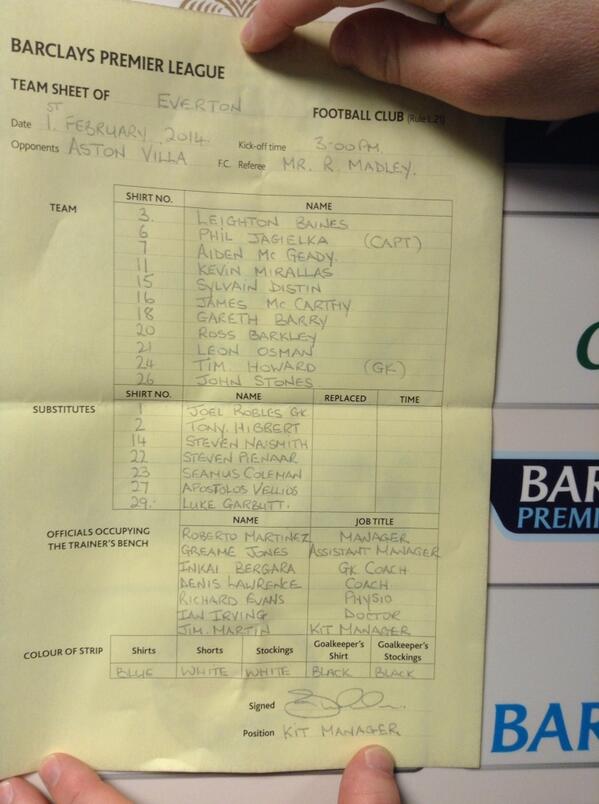 Coleman on the bench? Distin back? Has Bobby been playing mind games?

Geedy in for Pienaar is a surprise

Made FooFoo Gwladys wrote:Geedy in for Pienaar is a surprise

Maybe Pienaar is still somewhat bothered by a small injury?

Commercial break at the moment, but it might be correct. Video and audio are both good.... http://www.eplsite.com/stream29.html

Traore being presented to the crowd

Barry Horne is the co-commentator.

Mirallas as the lone striker... I think that may work.. he's fast & slippery

And we are underway!

That would have been some GP debut if McGeady had scored there. Promising.